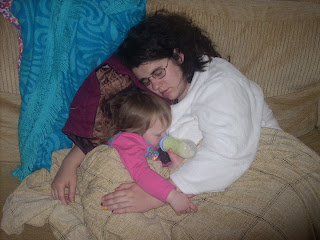 DD woke me up a 5.20am this morning! Just because she had decided to get up and play, not due to night terrors so I suppose that is an improvement in some ways. I pottered about for an hour putting the washing on and doing the washing up, but as soon as I sat down for a nice cuppa I promptly nodded back off with her on the sofa. That's when OH rolled over in bed and noticed I wasn't there and after checking on us both decided to take this snap which he then plonked on Facebook for all to giggle at. He's a meany sometimes, but I do think its a pretty cute photo. 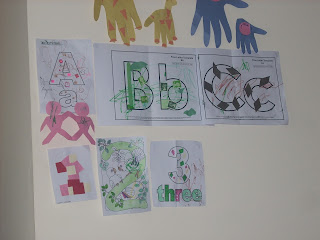 We are at the end of week 3 of Home school already. Our last task of the week is to make a cat out of sugar paper with spaghetti whiskers tomorrow. I will add our weeks progress to my homeschool page shortly. We fitted in the number 3 colouring between my knit and natter group this morning and my midwife appointment in the afternoon. 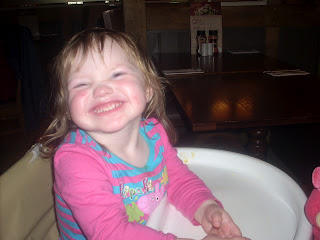 After seeing the midwife and being told my pregnancy is now boringly normal, which is how they like it, we decided that we were just to close to the local Harvester to say no to a meal out. OH had is usual meat feast and I had their lovely simply pasta dish. DD had a little bit of both meals along with a small helping of goodies from the salad cart. She is a huge huge fan of raw sweetcorn and pineapple chunks. We always make sure we have a few tins in the cupboard as a snack for her. 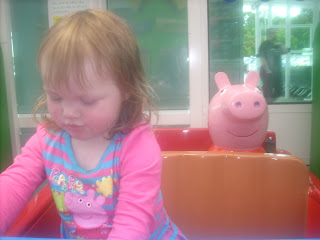 After our meal we took a quick dash into Mr A on our way home for some top up supplies. We ended up spending quite a bit as they are currently having a massive clearance on hundreds of things in the store. I will pop up a post on our choice of bargains in the next day or two.
We are now all cuddled up on the sofa together having a well deserved rest from our adventures. OH is trying to distract himself from the impending arrival of his new Arsenal shirt, as they have just released the latest one and he gets a free backpack because he pre ordered it a little while ago. I will blog about that to when it arrives, as it will be almost as exciting as our bump arriving in August lol. DD is singing happy birthday over and over to her stuffed piggy toy, and I am blogging it all to you fine people.
I might even toddle off in a moment and have a nice luxurious bath with bubbles and a good book. Wild aren't I?
x x x
Posted by Fishcake_random at 11:46