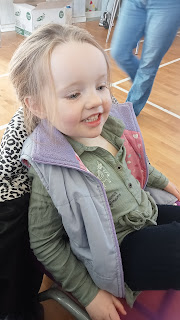 It's Friday! Another week survived 😊

This morning I popped the children to school and then had a reading cafe session with DD3. It was lovely to have some 1:1 time together. She really does have such a cute and sunny personality, it's a joy to be around her. 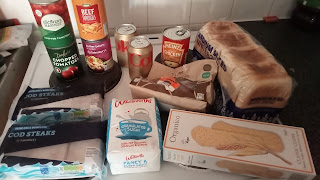 After leaving the reading cafe I popped to the community pantry. £5 really doesn't go as far as it used to even at the Pantry. The shelves were a little empty looking but I managed to complete a shop anyway. I'm thinking of trying to make some cod fishcakes or a fish pie with the cod steaks.
Once home there was a short break while we waited for DIY Dave to turn up. He is a local quy who fixes washing machines and dishwashers etc. His prices are very reasonable and if he can't fix something he won't charge you for looking at it. He also always gives out a wealth of hints and tips on looking after your machines and getting the best out of them.
He was able to repair our washing machine which had a minor issue, but sadly or dishwasher has gone to electrical heaven with a computer fault that just isn't worth the cost of fixing.  We will start looking for a good deal on a new one shortly. DH says to leave it to him as it'll give him something to do while he recovers. He quite likes researching it all, comparing reviews and machine specs etc so he's quite in his element.
We found some old long forgotten Meccano while decluttering some cupboards this afternoon. DH has listed it for sale on Facebook as a job lot. If we're lucky it'll make some money towards a new dishwasher 😊
In the early evening DH popped to Aldi, he was kindly given a lift by his mum who was also headed there too. We needed some essentials for the weekend so it saved me and the children trying to carry it all home by hand tomorrow. DH not being able to drive yet is definitely frustrating him a bit.
Tonight's plan is knitting in front of the England match.  Could it be coming home finally?
X X X
Posted by Fishcake_random at 11:14 1 comment: 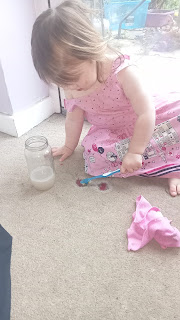 Good evening 😊
Thank you all the kind messages and good wishes for DH. He says he feels a little better each day but is getting quite frustrated with his lack of movement. He is okay doing things with his shoulder as long as it isn't to much weight bearing so he can feed himself and drink etc but if he needs to change heights, for example buttoning a shirt or pulling a zip it's still very painful.
Today was a cleaning sort of a day. I deep cleaned the patio doors and gave them a good shine up this morning and then tackled a few marks on the carpet from all those soggy feet running in and out. As you can see Baby C was quite happy to join in and help me ☺️
In the afternoon I popped to the shop. We need milk and three nice donations for the school tombola. The children are allowed to wear non uniform for a day in exchange for a donation. Each year group has a different theme so there is plenty of variety. I also picked up a packet of "whoops" biscuits. These are the biscuits that are a bit odd looking or broken which don't pass quality control. Some companies now sell them in big bags or boxes for quite a reasonable price. I paid 99p for 1kg bag. If you haven't tried them I recommend giving a packet a go. It's quite fun as you never know quite what you are going to get but they are always tasty.
The Afternoon school run was uneventful but rushed as we tried to beat the weather home. It was just starting to drizzle as we reached the door so we did a good job.
Dinner was chicken wings, veggies and baked beans. The three smallest all turned their noses up at their meals and ate a bowl of cereal instead. Tom soon polished off the extra chicken though, all that healing is giving him an appetite.
Tonight's plan are a little reading in bed and perhaps some knitting with a movie. I'm trying to knit Baby C a hat but I've lost my mojo with it somewhat and I'm getting cross with myself for not just getting it over and done with. I always seem to wander off whenever it's on my lap and so it just sits there looking crossly at me 😂
X X X
X X X
Posted by Fishcake_random at 09:59 2 comments: 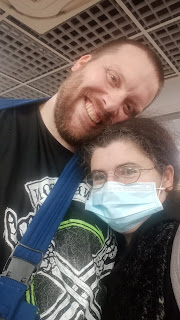 It's all been a bit epic here in the Frugal household! Poor DH has just returned home from a 2 week (almost...12 days!) Hospital stay. We've had to cope with brushes with sepsis, the possibility of superbugs, allergic reactions, and more antibiotics and IV's and cannulas than I can count.

We are all incredibly grateful to the all the wonderful NHS staff who directly and indirectly helped get DH back to a reasonably healthy state. We still have a little bit of a recovery journey ahead of us, but we can now face it together at home 😊

The story all started on the Wednesday of half term when we were invited to go swimming at a nearby water park. While going down one of the flumes with DS, poor DH picked up a small friction burn on his left elbow. We didn't really think much of it.

Fast forward a week and DH returns home from work as usual saying he thinks he's pulled a muscle or something in his elbow. By the evening his elbow had a bright red patch of skin around the almost healed friction burn. I suggested getting it looked at but DH insisted slathering on some Sudacrem and trying the local walk in centre in the morning rather than spend hours in A&E with late night drunks.  Gradually overnight DH developed a fever and the red patch began to rapidly grow. My dad took him to the local walk in service and they very quickly assessed him and sent him to hospital for IV antibiotics. I assumed that it would just be over night and he'd soon be home. How little I knew.

Over the next few days the infection in his elbow exploded. Drs we're drawing circles around its progress every few hours and there were several antibiotics being tried in the hopes of finding one that worked. He had to have his wedding ring removed as the Infection began to move to his hand, and I was warned he could be facing damage to his organs as the infection also crept up his shoulder towards his heart and lungs. Luckily at pretty much the final hour something started to work and the infection slowly was brought under control. Add in a sudden serious allergic reaction and yet more changes of antibiotics just to keep things hanging in the balance!

Thankfully he is now well enough to be home but still a little delicate. He is currently signed off work for 4 weeks but that will most likely be extended as he is very tired and has quite limited movement in his arm still.

I'm not quite sure what curve balls life will throw at us next. We certainly weren't expecting this one.

It's never a dull moment around here. That's for sure !