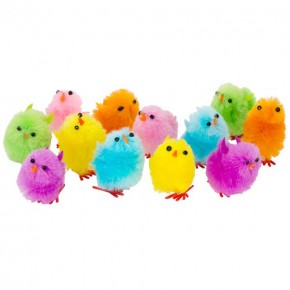 I was moaned about recently on Facebook. My crime was sharing pictures 'all the time' of the things I do with the children.
I was told it was easy to entertain kids if you throw money at them.
Apparently they don't read this blog, lol. 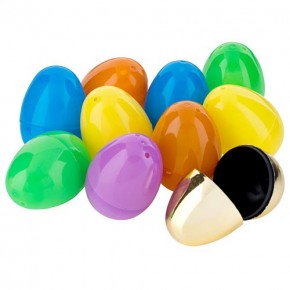 However it led onto an interesting conversation and long story short my budget for Easter half term activities is now £2. Which I've already spent!
My challenge is now to entertain the kids over Easter with 10 plastic eggs and 12 neon colored chicks.
The rules are to create at least 1 activity per day using the eggs and/or chicks. And I can only use basic supplies to supplement them (for example pens,paper, scissors etc) but nothing you might need to buy in (feathers, beads, pipe cleaners).

This is going to take some thinking about but I'm confident. Watch this space! 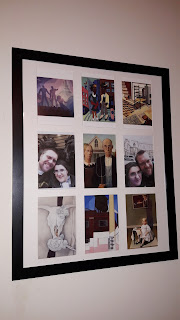 I've spent the afternoon upsetting the husband. It wasn't intentional, I just seem to turn into some OCD monster when arranging things.
It all started with the trip to London. Hubby kindly bought me a set of 12 postcards featuring paintings from the exhibition.
But we couldn't find any reasonably priced frames to display 12 cards. Or a set of 3 frames each displaying 4 cards, that we could agree on.
In the end we bought a frame to feature 9 cards and agreed to argue later about which 3 postcards we wouldn't include.
BUT...
we forgot to factor in that some of the cards were landscape and some were portrait. D'oh.
After much huffing and rearranging, a few threats of bodily harm and gallons of tea, we decided to use all the portrait postcards and fill the last two spots with photographs of us from the trip.
Cue a second round of bickering about which photos to use....more tea, more threats.
Hubby wisely left me alone at this point to choose how to arrange everything in the frame.

I'm really pleased with how it's turned out, Hubby has banned me from ever making another one. Poor fella.

Posted by Fishcake_random at 11:17 No comments: 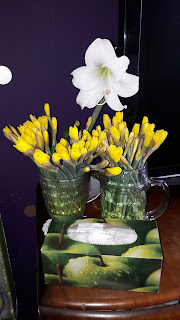 I love Daffodils, they are my favourite flower. So I was thrilled this morning to find clever Hubby had picked up 5, yes 5 bunches after work last night. He spotted them being reduced down  to 20p a bunch and decided to treat me. (Those bacon pastries must of been good!)
I look forward to watching then bloom over the next few days. 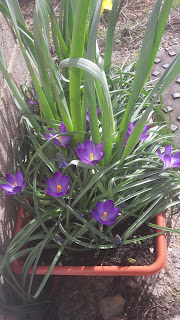 My spring planter by the front door is also bursting into life at the moment. The grape hyacinth and crocus have started to bloom, the daffodils should hopefully join them shortly.
Spring is here and Easter is just around the corner. I can't wait. 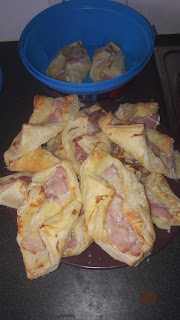 My three little monsters have become scarily addicted to Greggs Cheese and Bacon wraps. It's their preferred breakfast at the moment which is leading to several arguments each morning as we traipse to school and back.
The blooming things cost £1.65 a time!

Today I attempted to make a home made version using Aldi's ready rolled puff pastry (99p a box - I used 2) and a packet of Asda's cooking bacon (57p)
I managed to make 16 good sized wraps for just £2.55! That's an enormous saving of £23.85!
I'm definitely going to be whipping up a few batches of these to pop in the freezer. 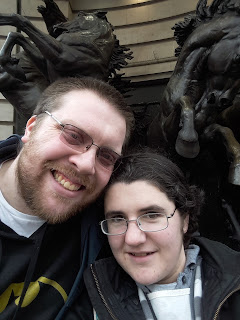 My wonderful Hubby surprised me recently with tickets to an art exhibition.
I really wanted to see American Gothic when it came to London, as it's the first time it has been allowed to travel outside of America and Canada.
The painting has been something of a favourite of mine since childhood. It's one of those iconic paintings that most people seem to know. Like Van Gogh's Sunflowers or Dali's Melting clocks (The persistance of memory) 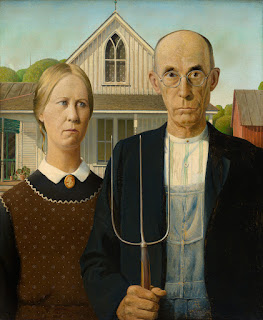 It's beautiful in real life, the detail of it is mind blowing. I really recommend a trip to see it if you have to chance. Who knows when, if ever it'll return to see us!
We also took the opportunity to do a little shopping. Only in the best stores you understand. Like treats for the children from Fortnum and Mason. 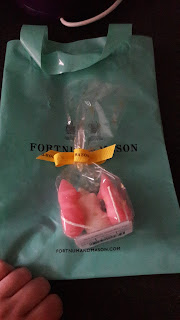 And the sweetest hedgehog coffee mug I think I have ever seen!
I do love the fun of some of Cath Kidstons prints. 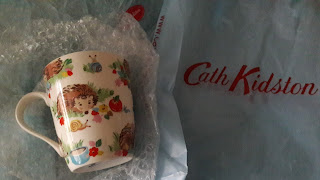 What have you been surprised with recently?