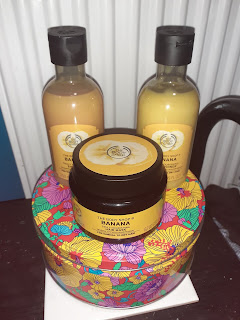 I had a message waiting on my phone this morning telling me I'd won some goodies in a Christmas Raffle I'd entered. I'd quite forgotten that it was being drawn on Christmas day.
A full size shampoo, conditioner and hair mask by the Body Shop. Not a bad prize at all and as you only need to use a small smidge of their products at a time they will last me a good while.
What a lovely suprise to wake up to!
I also recieved my last Treasured Trash delivery of 2020. Mostly it was baby items and books. I sorted the clothing into bags by size and gender. They flew out the door almost as fast as I listed them online. I saved a few cozy sleeping bags for Baby C but otherwise she is well stocked for clothing.
The books I will sort into bags by genre and list tomorrow. Being in Tier 4 should hopefully have them out the door pretty quick too.
All in all it's been a good day.
X x X
Posted by Fishcake_random at 11:52 2 comments: 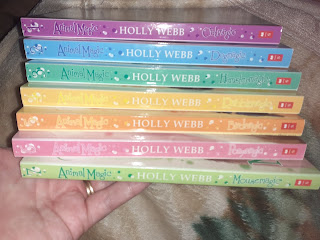 I was given 2 big bags of childrens books today via The Treasured Trash Network.
One bag seems to be a mixture  of all sorts of types and styles, the second bag contained two book series for girls. 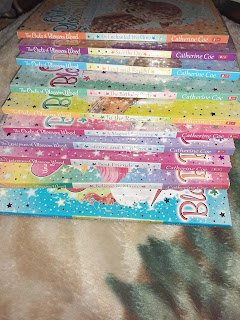 Both sets look as if they've never been read. Perhaps they were unwanted gifts?
Anyhow I knew immediately that were destined to be read by DD1 and would make a great start to her birthday presents in March.
I wanted to make them look special though so I looked up book gift wrapping ideas on Pinterest. I had no idea there was so many ways to wrap a book! 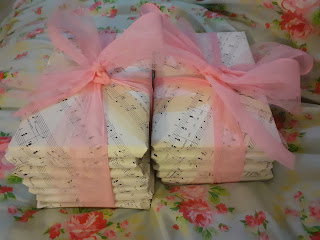 Here's what I came up with. The books are individually wrapped in pages of sheet music from my paper crafting stash, and bundled together with some of the pink netting offcuts I found in the scrapstore a few visits back.

I'm really impressed with how fancy they look. Cute yet quite grown up. And a very pretty start on DD1's birthday.

Posted by Fishcake_random at 13:53 No comments:

Daddy took us to the zoo 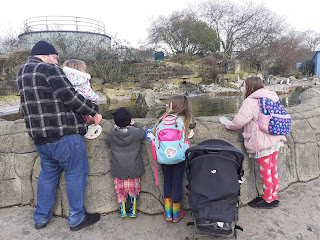 We have had a lovely walk around the zoo today. It was reasonably busy but everyone was behaving themselves and giving one another plenty of room.
Even the children on the playground equipment were politely taking turns to use the slide and climbing ladders. It was wonderful to see.
The weather was chilly and there were a few patches of icy puddles to manoeuvre but onc everyone was snuggled into hats and gloves we were fine. DD3 had an adorable pink nose though by the end. 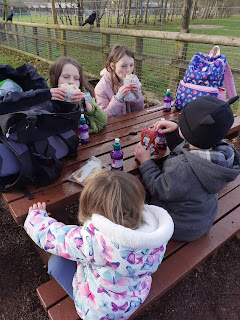 The picnic lunch went down well though the damp picnic benches did not 🤣 I tried to explain it was character building stuff but no one was buying it.
The promise of a hot chocolate and some peanut butter toast kept us all moving towards home.
It was pretty perfect as day trips go.
We might even be going again next week if our school doesn't reopen but we shall have to wait and see what Mr. BoJo says.
I'm in two minds about it. I love having my children home with me but I also have a bathroom to decorate which will be vastly easier with them safely out the way. 🤣
Time will tell.
How was your day?
X x X
Posted by Fishcake_random at 10:35 No comments: 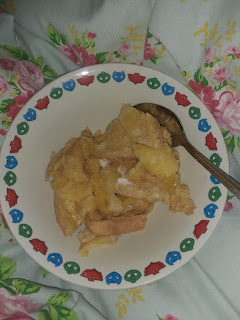 I was woken early this morning by an exploding baby. After giving Baby C a bath and bottle I decided to make use of the extra time.
By the time everyone else was awake I had made a Bread and Butter pudding for pudding. I used the packet of apple sauce we hadnt used for Christmas day in it. It made a lovely warm breakfast.

DH did the best he could with the planned food shop but the aisles were pretty bare. The fruit and veg was almost non-existent!
My parents very kindly rescued us with a bunch of bananas for Gman. He was quite cross we couldn't get any as they are his favourites.
DH did manage to find a pile of cheap sausages for pennies a packet and some reduced chicken and mushroom slices which are perfect for tomorrow's picnic.

One of my favourite knitting bloggers added a new free hat pattern to their page a few days ago so that is my entertainment for the evening.
I'm currently watching a rather bizarre but entertaining show called Home Sweet on Netflix. I recommend it if you like bizarre storylines, grotesque cgi monsters and cartoon style acting.
Personally it's just my brand of crazy 😆
X x X
Posted by Fishcake_random at 13:14 1 comment:

What day is it? 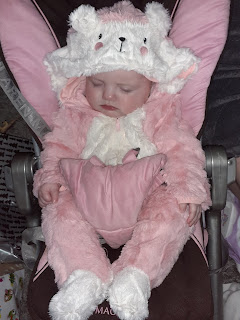 We're in that weird space between Christmas and New Years. That odd period where no one is quite sure what day it is or what to do with that said day. DH is back on furlough so that's made it all feel even more bizarre.
As we haven't been up to much I haven't really got much to share with you guys.
Food has mostly been using up leftovers and hunting down the forgotten "something" we had to get in for Christmas but forgot about on the day 😂
We're out of milk and bread so DH says he'll pop to the local shop tomorrow and replenish our supplies. We have plans to visit the local zoo on Wednesday so that'll be a good chance to run off some of the kids energy and blow away the cobwebs.
Hope you are well
X x X
Posted by Fishcake_random at 10:58 No comments:

I woke up early this morning to watch the sunrise over Stonehenge.
English Heritage streamed the event live over Facebook to the world with gently background music. It actually made me feel quite emotional as I realised I was watching with 14k other people around the world.
It was also a good reminder that even with all the other worries happening at the moment such as C19, Brexit, finances etc that the really real stuff is just as dependable as ever. The sun will always rise, the seasons will pass, the planet will turn on.
It was quite a philosophical moment for me that early in the morning. 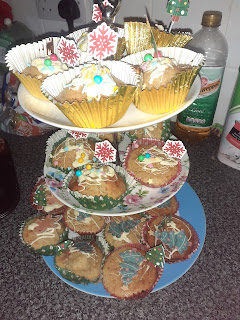 Being on facebook early also gave me a chance to pounce of an offer of free food via a food sharing scheme.
We recieved paninis, pastries, french baguettes, crusty rolls and a bunch of rather brown bananas.
The bananas were quickly turned into a big batch of banana cakes using DD1's baking skills and a nice recipe from BBC good food.
The smallest Spurriers all enjoyed decorating them together. 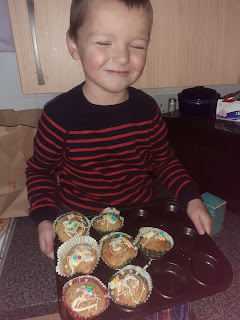 We saved a few back for Gman who is officially cast free as of this morning 🥰
We asked him what he would like to do now he didn't have a cast on and he opted for a nice deep bubblebath with his toy dinosaurs for company.
X x X
P.S - I've received a few requests over the past week asking if we have an Amazon wish list. If you would like to see it you can find it here. I will also add a seperate page to my blog.
X
Posted by Fishcake_random at 05:48 No comments: 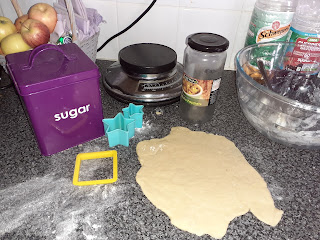 I've been baking with my two smallest people. It helps me think, not sure why, but that's what it does.
DH is being moved at work to lower paid job. It's pretty devestating to January's finances and throws our planned budget for the year out of the window. 2020 it seems wasn't finished screwing people over 😔
Being Christmas we made mince pies using things from the cupboards. There wasn't quite enough margerine so I added a smidge of oil to stretch it out a bit.
We don't have a rolling pin so I used a clean jam jar, and I can't find any circle cutters though I swear I've got some somewhere. I raided the playdough equipment for the square cutter but it did the job nicely. 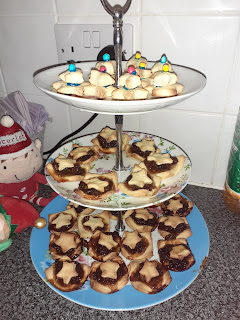 Hopefully my little herd of children will enjoy these in the morning. The Elves are going to "make" them overnight as a suprise.
Because that what we do in Spurrier house, we keep calm and carry on!
X X X
Posted by Fishcake_random at 05:15 9 comments:

Teacher gifts on a budget 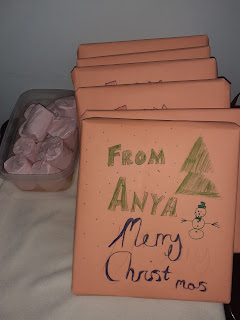 We've spent the afternoon wrapping and decorating gifts the children's various teachers, TAs and support staff.
Our budget was £10 for everything.
6x Chocolates - £6
4 for £1 votive candles x 3 - £3
We used paper from our scrapstore stash to wrap the chocolates which we then decorated with felt tips.
The candles we wrapped in pink tissue paper which came with one of Baby C's baby gifts back in July.
X x X
Posted by Fishcake_random at 11:42 2 comments: