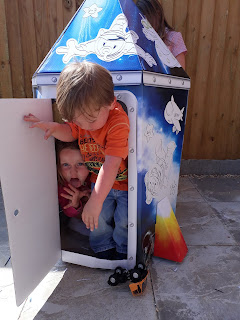 Well there's aliens in the garden and boxes everywhere you look, but we are officially relocated!
We managed to find a local school with spaces for the girls almost immediately. They finished their old school Friday and started the new one the following Tuesday.
Most of the estate is still being build so GMan can be found hanging out the window gasping at all the machinery, diggers and workmen. Several of them now give him a cheery wave as they walk past. I think he's become a mascot 😂
Baby W is probably completely unaware anything is different but a much much shorter school run means a lot less time strapped into her buggy which can only be a good thing.
I'm finding it a bit harder to settle in but I think I'll feel better once the unpacking is all finished.

Thank you for all the lovely wishes for our move 😍 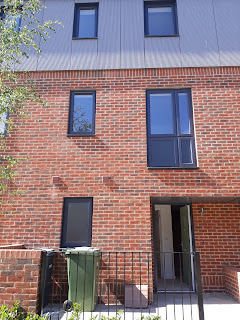 Sorry I've been quiet, but something wonderful has happened. We have a council house!
This time next week we will be carting all our belongings 30 miles up the motorway and beginning a new life in Eastleigh.
And yes that is a town house (Three levels) you should have seen my face when they told us it wouldn't be the 2 floor house we were expecting but the house you see in the photo above!
We have been so blessed! 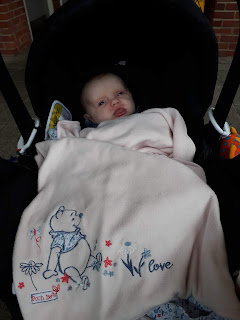 DD; Mum! There's Pooh on the baby's blanket!
Me; What!
DD2; Yeah! A big Pooh!
Me; *dashing over in a panic*
Kids; *laughing at their clever trick.

Little monkeys got me good! 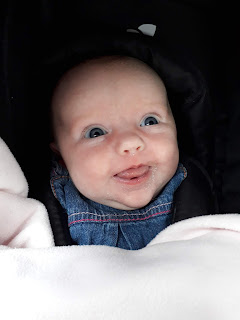 Even Baby W was amused! 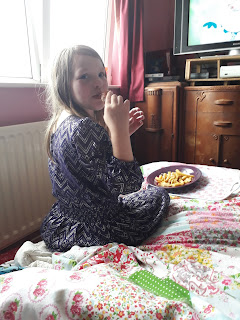 First day back hasn't gone well for DD1. She refused to go to sleep last night until 10.30pm! Unsurprisingly today she is a complete joy to be around(!).
I think mostly its anxiety about returning to school. She has a bully who is making life tough for her 😡 DD1 is desperate for us to move and leave "stupidface" behind. 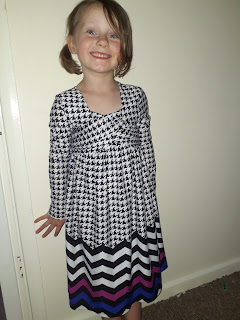 DD2 survived her first day at school! Traditionally the first day back lasts a few hours before we get a school phone call. However the week is young and I'm sure the school will be in touch again soon 🙄
I bought the dress in the photo today. It was 20p from Sue Ryders rummage bins. I thought it would fit DD1 as it says 10 on the label but she complained it was too tight. 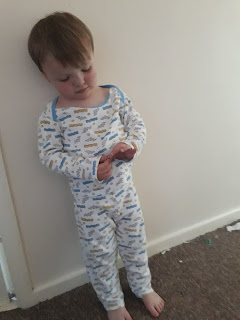 GMan has had a nice day. We had lunch at a local cafe which also houses the local food bank. All cafe profits go back into supporting the food bank so it gives me a good feeling to support it. We had fresh apple juice and hot buttered toast each for £1.50!
The Sue Ryder rummage bin also gave him a new pair of Batman print pyjamas. The manager insisted on charging 20p for them even though they are technically two items. She said it was because I was a good customer and they were a set. 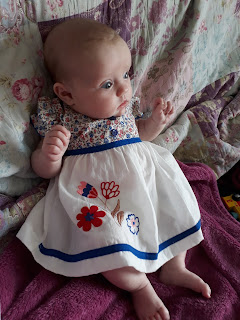 Baby W is 2 months old today. We celebrated by getting dolled up in this beautiful linen summer dress. She looked like a little doll in the pram and several people compliment her outfit.
She is almost rolling over from her back. She can get her top half over easy enough but gets her bottom half stuck half way and you find her pedalling air and getting very frustrated. I think she'll soon have it cracked though. Then we can work on doing it the other way 😂

Posted by Fishcake_random at 13:03 No comments: