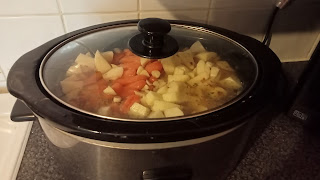 It's been a bit of a busy day.  It started bright and early with our neighbour knocking on the door asking to borrow some milk as they'd run out. I passed them the end of the 6pint bottle we had as there was a second 6pint bottle already in the fridge to replace it. There wasn't a lot left but enough for a bowl or two of cereal and a few cups of tea 🙂

Then I took the children to school. Poor DD3 was coughing the whole route and was very cuddly while we waited for the school gates to open. I told her teacher I would be home all day and if DD3 needed collecting to just call me and I'll pop back.

Once home I set up the slow cooker to make a nice beef stew. I finished just in time for the school to ask me to collect DD3.

I returned to the school to find DD3 was fast asleep in the medical room, I woke her up gently and managed to half walk and half carry her home.

Ten minutes after being home and settling DD3 into a sofa nest and given her some Calpol my phone rang again! This time is was the other school calling to tell me that DD1 had been accidentally hit in the face during a PE lesson. DD1 was okay but had gotten herself into a bit of a state bordering on a panic attack. Eventually she had calmed down and gone back to her classes.

Finally all the phone calls and interruption stopped and I was able to make a dessert for the evening while DD3 and DD4 had a little nap on the sofa.

My parents kindly walked DD2 and DS home from school for me so that was a welcome break. My neighbours knocked on the door again and gave us a new 2 pint bottle of milk to replace the milk they borrowed in the morning  which was very kind of them. 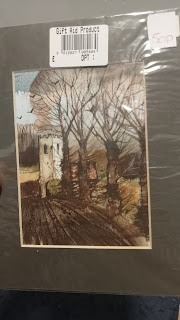 *** Please enjoy this random photo of some art I bought yesterday. It has nothing to do with my post but I like to add a picture with each blog 🙂**
Life is feeling hard right now. I know and recognise that it's tough for everyone out there but my blog is about me and my not so little family so I can only really go on my own life experiences when I talk about things.
Everything just feels so overly complicated at the moment. It all seems to take so many more steps and stages to do anything than it used to. I'm finding myself craving the simplicity of the first lockdown. I miss having so much time with my children and my husband each day.
I feel like each day rushes past me and then I feel bad each evening that I didn't do enough that day and promise myself that I will do more tomorrow. It's not a nice way to live at all.
I need to find ways to slow the world down a little bit and smell the roses more.
X X x
Posted by Fishcake_random at 04:18 2 comments: