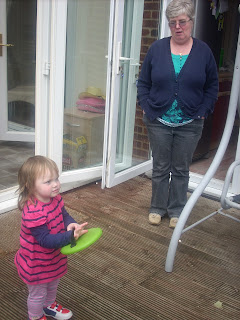 Yesterday my brother inviting us all round to his house for his annual summer BBQ. Sadly it was quite an overcast day but we still made good use of the garden and managed to cook lots of food on the BBQ. DD was in her element because DB had invited several of his friends and our mum to the afternoon as well, and there is nothing DD likes as much an audience.
DB had been especially sweet by making sure there was plenty for DD to play with including a stickyball set and an inflatable football. 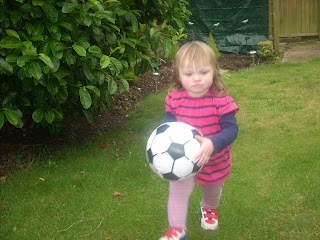 Although not a large garden there was plenty of grass for DD to stomp about on after devouring a massive pile of sausages, burgers, cheese and nanny's famous homemade cake. She certainly worked up an appetite with all her entertaining. 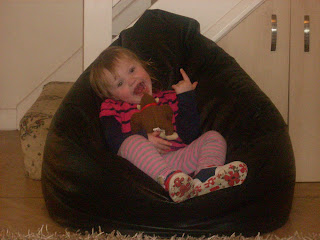 Once the weather had eventually made us all retreat inside, we watched a football match on the TV and had lots of random conversations. The kinds you do when their is a group of you and drinking has been involved. Topics included immigration, the Olympics and smoking.
It was a lovely chilled afternoon and DD slept really well last night after all her adventures. So a huge thank you to my brother for having us, feeding us and for the many games of throw and catch with DD.