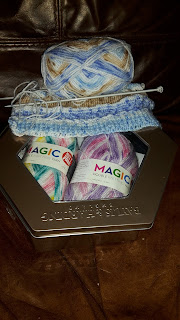 I was going to treat myself to some hat kits in a local wool shop today. I'd been thinking about purchasing them for a while but £5.50 was a little to expensive as I wanted 3 kits so the children had a hat each.
This week the store had a sale on with the hat kits reduced to £3.30 each. I decided to treat myself finally.
When I went to the shop to get them there was already another customer in the shop with a pushchair. It's only a small shop, no way would I get my pushchair in there as well. Luckily I was with a friend who offered to stand  outside  with the buggy while I nipped in. Problem solved.
Or not.
The other customers buggy was pushed up against the entrance, the door opened inwards against the buggy so I carefully tried to nudge the buggy back so I could slip into the shop. But the brakes were applied and the door barely opened half an Inch.
So I stood by the window waving to catch the attention of either the customer or the owner. Both looked at me several times as I pointed to the door and the buggy, and promptly ignored me.
After a few minutes of standing outside the shop feeling a bit miffed another customer arrived, they were also ignored. We both waited a little longer before the newly arrived customer said the owner obviously didn't want our custom and she'd go elsewhere.
So I followed. Instead of spending  £9.90 in the Yarn shop, I went to pound world and bought 3 balls of their yarn instead. Even better it was 3 for 2.
Since then Ive found a  free pattern on Ravelry and splurged £1.50 on a pompom maker on Ebay.
Overall I've saved £6.40 and learnt were NOT to shop in future.
Definitely a thrifty Thursday.