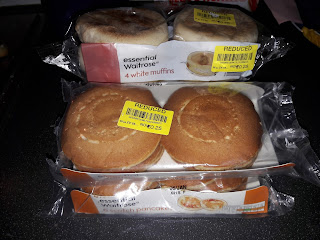 I seem to having quite the luck with bargains this week. I popped into Waitrose on the afternoon school run and found a huge basket filled with reduced bakery bits.
I snaffled 2 packets of pancakes for tomorrows breakfast and 2 packets of muffins for lunch.
I have some bacon left over from DD1's wraps and plenty of eggs in the fridge, so a homemade version of the mcmuffin is on the cards. 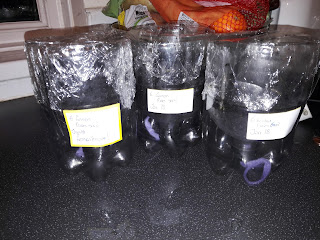 Sadly Hubby has been feeling under the weather all day. He thinks it might be the flu thats going around. Being a bookie means he handles quite a lot of cash throughout the day and there's not much germier than money.
With him and all the children in bed by 8pm I've been amusing myself by planting lemon seeds in coke bottle planters.
My last attempt to grow lemons failed miseraby but as it's a project that only costs time and not money I thought I'd have another go.
Who knows, I could have just begun a vast lemon empire 😂