Poodling in the kitchen 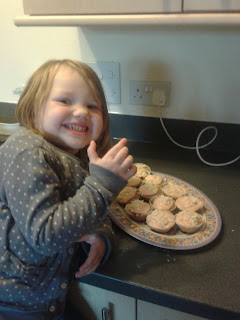 We've been in the kitchen today making and creating. DD and I tried our first pack of raspberry cupcakes (5 for £1 Approved Foods). They are so easy to make which means DD could do most of it herself with only minimal guidance, and they are utterly delicious. By changing the muffin cases provided with the kit to cupcake case we managed to make 12 small cakes rather than 6 large ones. 12 cakes for 20p plus an egg is bargain.
Its not all good news though because the fab baking boy muffins were awful. They remind me of babybath sponges that have been dipped in cheap cocoa powder. YUCK 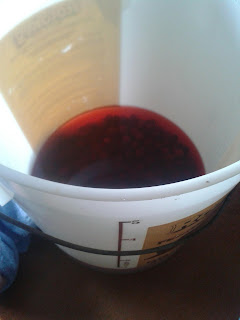 OH has been distracting himself during this difficult time by trying some homebrewing. The first experiment is blackberry fizz, at the moment it is all infusing on the fermenting bucket and should be bottled up shortly. Fingers crossed it tastes as yummy as it smells. 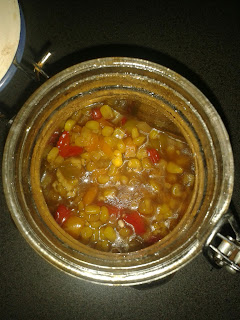 And finally I whipped up some sweetcorn relish for the fridge after picking up some more cheap sweetcorn and a pack of reduced peppers at the supermarket. This is just perfect for jazzing up some cheese and crackers.
Things feel like they are slowly returning to normal. Thank you for all the emails and comments of support. I love you guys.